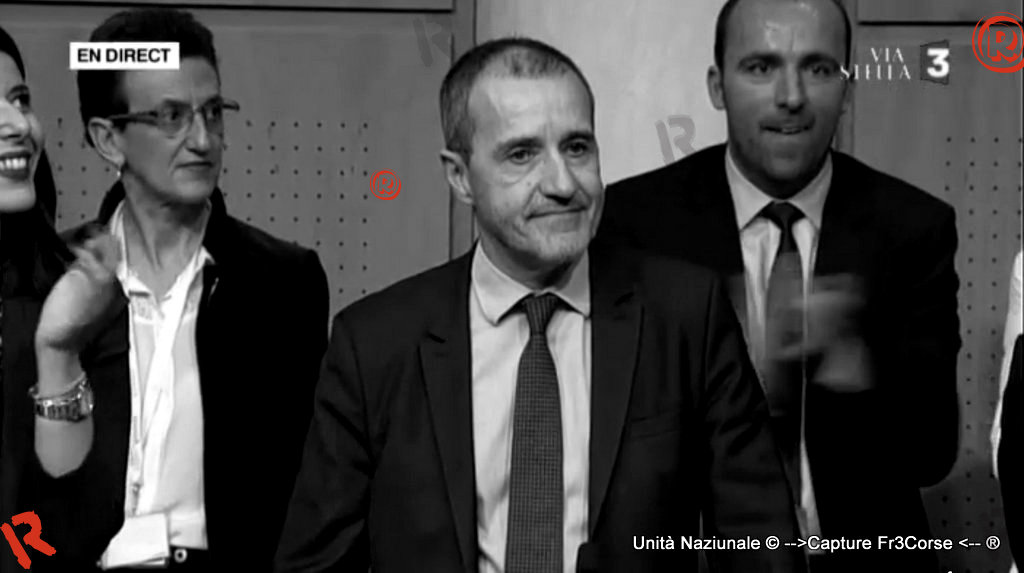 (unità naziunale – 2 janvier 2018 – 16h00)  here is the speech of the new President of the Assembly of Corsica within the new Collectivité Unique this January 2, 2018. (Lingua Corsa, English, Français)

Dear colleagues, Dear members of the assembly of the young people, Dear compatriots,

At the beginning of the year, I wish you peace, health and happiness. The Corsican people have decided it that way…Our majority will govern our country’s public affairs for the years to come. From the votes won, so numerous, we are indeed proud and we thank all the voters from the bottom of our heart.

However, these votes cast upon us a huge responsibility. The confidence, bestowed to us in 2015, has widen a lot and no one can deny, from now on, the legitimacy we are granted to carry out our project. A long and difficult path I would like to dedicate this victory to all of those who fought and are no longer here today.

They are still by our side. I also want to dedicate this victory to all our fellow compatriots who were hurt and to the mourning families. I would like to dedicate this victory to our prisoners and to our brothers that are still being looked for today. To them who, for years, have been plunged into misfortune by an unworthy hand. To them who are facing a cruel fate with tremendous courage. I send them with all my admiration and affection these verses from the prominent British poet William Ernest Henley: ‘It matters not how strait the gate, How charged with punishments the scroll. I am the master of my fate:

I am the captain of my soul.’ Shall they be sure that we will never relent our efforts, never ever, until they are all back to Corsica, freed and back to their loved ones.

« I would like to dedicate this victory to all the members of the FLNC, the undefeated army that emerged 40 years ago to defend the Corsican People at a time when democracy did not exist on our land »

40 years, so long a road, so difficult a road. A long and difficult road that shall never be denied by any of us.

We made of this way a wide and radiant road. We want to share this victory with all the Corsican people that have trusted us, long-time activists as well as late nationalists that are sometimes being criticized on social networks.

To our friends who reproach them with their late commitment, I dare ask : ‘What would have been Corsica’s situation if we had remained the handful we were 40 years ago?’ So let us always welcome those who join us as they should be. We are all equal.

As for the early activists, let them be thanked wholeheartedly because without them, nothing would have been possible.

Lastly, we want to share this victory with those who haven’t cast a ballot or those who have voted for our opponents, because this country will be built with all the Corsican people, even with those who once fought against us, arms in hand, years ago.

Our nation’s doors are opened to all. Let me have a word for all the elected members of this Assembly. I’ve strived to be, over the last two years, the assembly’s President of all the members here and I will keep on doing that way.

Be it for the majority members or the opposition’s, to all of you, my office door will always be opened. Each one of us represents a part of the Corsican People and we must always be up to the task. The strength we use in the debate’s speeches is a normal thing in a democracy but the respect we give it is a fundamental value and an all-member’s due. The election campaign is now over and we have left the little excesses that peppered it behind. Be it for the majority members or the opposition’s, we are all Corsican people and we all belong to a small People.

Apart from politics, we often are friends and sometimes even family members. And then and above all, we are related by a mission to the service of commonweal and the best interests for Corsica. National project, social justice : On the way to a Corsican model As I was just saying, our project is of course a national one but also a social one, for all the Corsican People, and specifically for the ones suffering the worst hardships.

To the Corsican people, I want to remember our social engagement. To young people, uncertain for their future, I mean that we work for two years to assure them, to resume the words of Pope François: the work, the roof, the control of the land.

To the oldest, I mean that we need that they stay actives in the construction of the country to guarantee the transmission of our values. To the agents of the new Collectivity, wich I greet, I want to say our confidence in their skills and in their will to participate at the construction of Corsica of tomorrow.

The Corsican country we aspire to is one in which no one will be left lagging behind. A country in which each child will have the same opportunities of social way-up as any other child whatever his origin or social background. That is the reason for which we want to implement the means of a social and economic development on the one hand and a new education system on the other. National emancipation, development, education and social justice are and will remain at the core of our commitment to build our own political system.

In the years to come, we will keep on working, restlessly, day and night to set up, at the end of the mandate we have been granted, a fairer and better Corsican society. The Paris connection A few words concerning our relation to the French government…after 40 years of conflict, a conflict that was necessary and one that we clearly and thoroughly take responsibility for, we started writing a new page of our History two years ago. Those, like us, who have lived those 40 years know the price of peace, this peace we have been willing to secure for the younger generations.

We are glad that our children won’t have to experience what we have been through. From now on, peace will never be questioned again, no one will dare to. Yet, the political struggle with Paris is not over, though it has taken a different stance since 2014. Today we’re facing this new step with calm because we are endowed with an immense strength, the one we were given by the Corsican People.

Within a few days we will start a round of talks with the French government. At the talks’ table, we will bring our project, a project that has met a large democratic support. Facing us there will be France’s representatives because the issue of the talks to come will be the one regarding the relations between Corsica and France. For years, across the Mediterranean Sea, some have been presenting our struggle as an anti- French process. Yet, this has never been the case.

All the patriots forced to say no, whenever 4 or wherever in the world, have done so for the love of their land and not for the hate of others. They would say as Antigone once did: ‘It is my nature to join in love, not in hate’. We ourselves are that way, passionate by this little People of ours that has never harmed anyone. A People that aspires to live in brotherhood with the surrounding Peoples in the Mediterranean, in Europe and beyond. That is the reason for which in the talks to come, we are willing to talk to Victor Schoeler’s, Pierre Mendes France’s or Michel Rocard’s France. A France that is worth the respect and – Why not dare say it – the friendship.

Nevertheless, friendship has nothing to do with allegiance. For friendship finds its roots in an equally respectful relationship. As far as I am concerned, I am convinced that willing women and men are able to get along and agree. So be it… The right to self-determination The right to happiness Two years ago we said that our majority was the first national government since Pascal Paoli’s.

Some people then thought that we wanted to go back to the 18th century. They realized that it was absolutely not the case, as, since we came to power, we have strived to take Corsica on the road to political modernity : “The general diete of the corsican people rightfully sovereign, convened by the General according to the terms established in the city of Corte on the 16, 17 and 18 november 1755. Having reconquered its liberty and wishing to give its government a sustainable and consistant form by transforming it into a proper Constitution to ensure the happiness of the Nation”. But what is true nonetheless is that at no point do we aspire to forget the past, particularly Pascal Paoli’s century, our golden century.

The preamble to the 1755 Constitution is a treasure of political innovation. To us, nationals, this preamble, still up to date, is the highest legal document that exists. Within six lines, only six lines, it gives birth to four outstanding ideas. The first one is the idea of a constitution as a fundamental law that no People had in Europe at the time. The second one is the idea of a ‘nation’ in a modern way: a united political community, not only as it was until then a group of natives from a specific territory. The third one is the right for Peoples to make their own decisions, the right to selfdetermination. ‘The general Diet of the Corsican People, legitimately master of itself’.

That was an innovation in the 18th century but the idea is still valid nowadays, at the core of the Pè a Corsica project for which we were elected last December. Lastly, the fourth idea, the right to happiness. An idea that was to be found later in American and European constitution bills. 5 It seems to me that the last two ideas, the right to choose one’s destiny and the right to happiness are indissolubly linked for all Peoples and so for ours. That’s the reason for which – and I’m saying it in a very solemn voice – we will never accept to give up one or the other because no country shall ever be grieving happiness. Therefore dear colleagues, dear members of the assembly of the young people, dear compatriots,